Coding in the Future: Relevance and Predictions 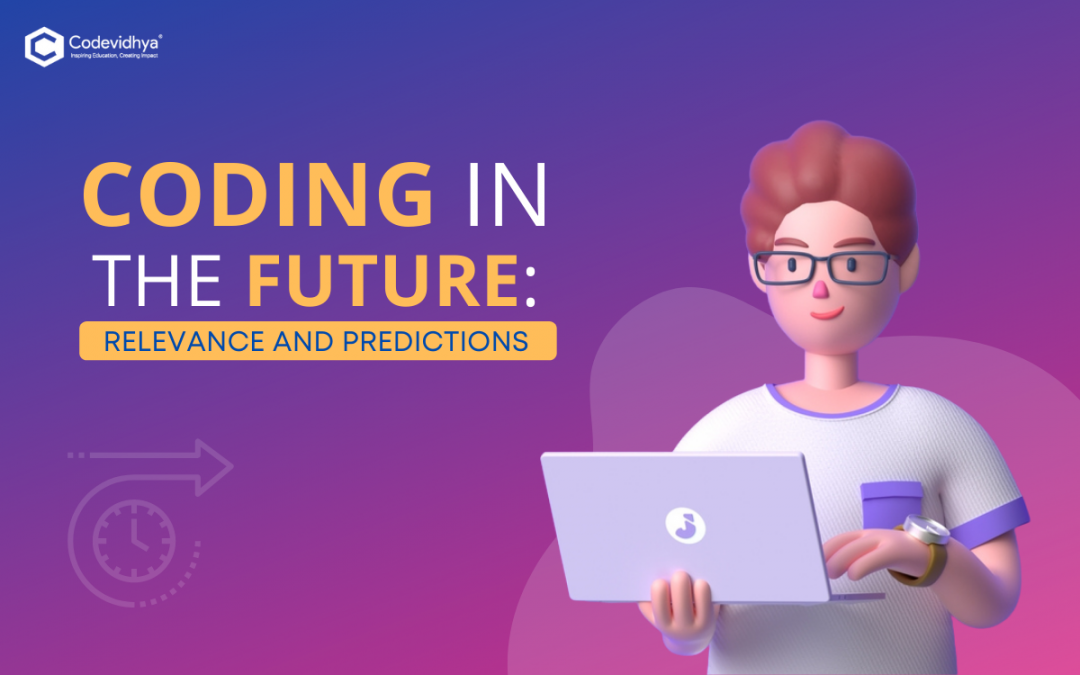 “Technology advances at a breakneck pace”. This remark is much more accurate in today’s world as we are always trying to find out about the scopes of coding in the future. Technology develops at a fast pace every day.

It’s not difficult to claim that technology and the people who deal with it are at the cutting edge of our evolving civilization if you follow this line of reasoning.

It’s interesting to think that 100 years ago, people had careers that seemed so futuristic that they were mistaken for science fiction characters. Some of these positions now appear to be obsolete.

This raises the question of whether coding will ever lose its current usefulness. Will it lose its luster as our society’s new revolutionary sector in a few years?

However, not everyone is aware that coding and creating algorithms have existed for a long time. Even if it isn’t in its current form.

Ada Lovelace is said to have written the first computer program in 1843. Things have advanced a lot since then. We all know that coding is the language of the future. What coding in the future would look like?

But with coding’s exponential development over the last two decades, will the industry’s growth be continued for years to come?

Coding, often known as computer programming, is the method through which we connect with computers.

If you understand how to program code, you can instruct computers on what to do or how to act much more quickly.

You can use this expertise to create websites and apps, as well as process data and perform a variety of other tasks.

Is “Coding in the Future” in Danger?

Until now, coding has served as a bridge between humans and machines. We have our languages as humans, but computers never comprehend them.

Binary, or 1s and 0s, is how computers work. Coding languages can translate human language into a format that computers can understand and convert into binary commands.

Some claim that artificial intelligence will progress to the point where this bridging gap will be obsolete.

Without any intermediate, the computer will be able to interpret human language and transform it to the binary it requires.

Relevance Of Coding In the Future

Coding and languages as we know them may change since new advancements occur every week. And some of them have the potential to radically transform the industry.

However, even if artificial intelligence becomes exceedingly intelligent by 2030, people would still be required to program it unless it is allowed complete autonomy.

Absolutely. Coding will not only be vital in ten years, but it will be even more so than it is now. The grammar of coding languages, on the other hand, will continue to improve.

When coding first began, it was all about punching holes in pieces of cardboard. Then it appeared as follows: 00101010101. It now appears to be written in English.

Computing systems have become more pervasive in our lives. And, directing these gadgets what to do and developing new uses for them will become increasingly popular.

However, we still have a long way to go before we can speak the simple natural language of computers.

And to have them understand and accomplish complex jobs they’ve never been trained to do.

Basic, pre-programmed tasks, such as “give me directions to the next gas station,” are already accessible.

However, instructing a computer to perform something it has never done before will still necessitate a specialized grasp of how to communicate with a computer programmer’s specificity.

Other than this, computational thinking is required to explain an algorithm.

The syntax for creating a loop or a conditional for a computer to do something or make a judgment may change. But the underlying notions beneath it are unlikely to change for decades.

4 Predictions: How Coding Will Change In Next 10 Years

Developers who have been in the profession for even a few years have seen several coding languages and tools grow and fall.

Software development is a dynamic sector with continually evolving job requirements. So, it’s critical to keep an eye on future trends and technologies that could help with the process.

Here are four predictions regarding how programming will evolve in the next ten years.

Coding Will Be More Complex

Cloud-based technologies, containers, and low-code platforms suggest that many developers will work at higher levels of abstraction in the future.

That is also away from the low-level aspects of coding.

On the front end, we’ll see more augmented reality (AR) and virtual reality (VR). That means developers will need to learn how to design those apps, as well as include voice and natural language processing capabilities.

AI Will Play A Significant Role

Today, AI is beginning to make its way into development tools. For example, Microsoft included an AI platform in its Windows 10 update, allowing developers to use pre-trained machine learning models in their apps.

Rice University researchers developed BAYOU, a search engine for coding that employs deep knowledge to allow developers to enter a few keywords and see code in Java that will assist them with their tasks.

More examples will emerge in which development tools attempt to predict developers’ meaning.

By doing this, it makes it easier for them to communicate that goal, resulting in yet another kind of abstraction.

Origination Of A Universal Coding Language

Programming must be simple to learn and build upon to enjoy the benefits of developing technologies like AI.

Python may be recognized as the great-great-great-grandmother of future languages. It may appear to be similar to English on the surface but is significantly easier to use.

Coding bricks, similar to the wooden alphabet blocks we used as kids, will be utilized to create programs.

Developers will be able to link the blocks together to create any functionality they desire, and the blocks may not even need to be expressed in text.

Future languages may contain visual representations of data changes, such as an image of a calendar, for example.

The user can choose and set dates using this block. They could also incorporate blocks that allow tactile sensory devices to be included. This will allow even people with vision difficulties to create programs.

A Strong Part Of Education System

Programming will accompany reading, writing, and arithmetic as a core educational component for kids.

Data analysis for big data sets, machine learning, and simulation to lower the cost of testing and manufacturing will be required in every technical career in the future.

One of the most crucial skills for current and future generations to learn is coding and coding literacy. It is undeniably significant in the current era, but coding in the future is even brighter.

We are surrounded by electronic devices that are all running untold amounts of software that are based on some form of code. Our modern world is also strongly dependent on the internet, with workers becoming more and more computer literate as time goes on.

As a result, it’s impossible to dismiss the significance of coding. So, if you want to secure your future, learning to code is an excellent choice.

There are multiple digital platforms available that provide Coding Courses. One such platform is Codevidhya which offers excellent coding courses for kids.

So if you are looking forward to booking a free coding class, click here.