Coding vs Programming: Differences You Should Know 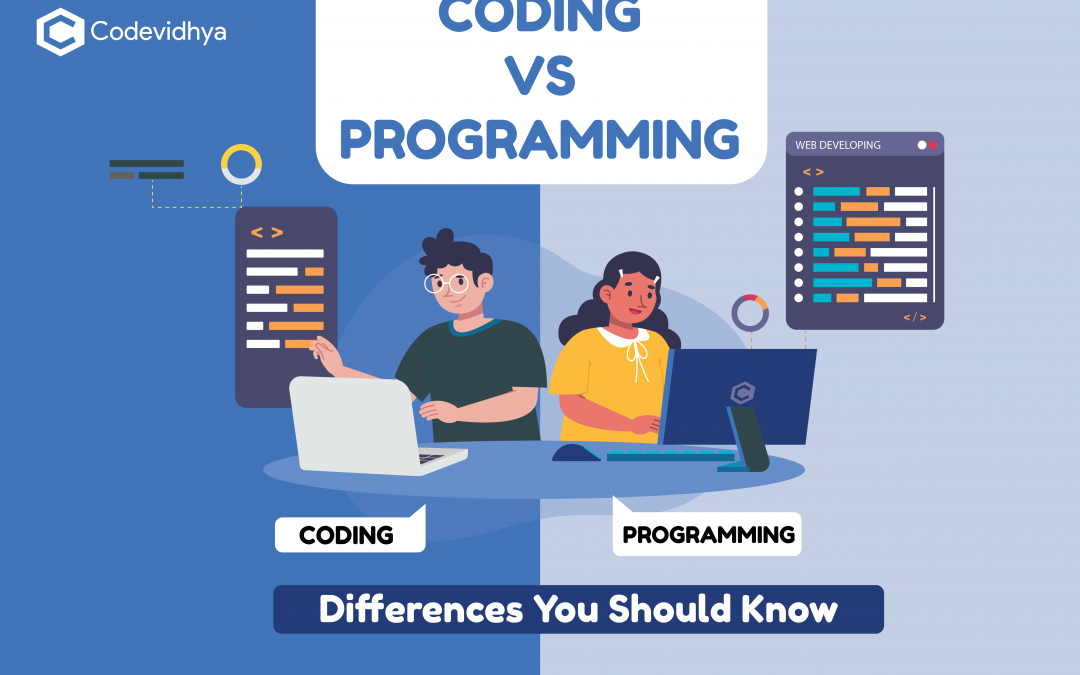 In this digital era, you must have heard about these two words, coding and programming. These are the most common terms in the software development industry. But most of them miss out on the difference: Coding vs Programming

Those who are new to tech easily get confused with these two terms. Coders and programmers are almost the same things. But there are plenty of factors that differentiate them.

Let’s explore the differences between coding and programming, and see how they can work together.

Also, we are going to have a look at how we can build apps and websites using coding and programming as a whole.

And don’t be confused. You’re not the only one! Let’s jump in…

In its simplest form, coding is communicating with computers. It tells the computer what actions to take. Computers only understand binary language. So, Coding is the process of converting human language to an understandable machine-level language.

Coding is a subset of programming. Thus, it is the fundamental skill that you need to know when you learn to program. You are providing instructions to the computer with the help of codes written in different languages. Languages such as Java, C++, Python, PHP, etc.

Coding is the initial step of developing any software. It is used to make any sort of program, like softwares, websites, or games.

On the other hand, programming is a much complex entity. It includes the bigger picture of creating an application. Coding is just the part of writing the source code.

Programming as a whole includes coding, debugging, testing, and implementation of the code to create a quality software product

After the coding part is done, there comes the above steps. Debugging is the process of removing bugs and errors from the code to make it compilable.

Testing involves a testing engineer who looks into the features of the source code. The tester ensures that the software created by developers is fit for its purpose. Testers make sure whether the product is ready for the users before it gets deployed.

There’s more after the program is deployed for the public. That’s maintenance.

As we saw that coding and programming are two different things. A programmer can be a coder, but a coder cannot be a programmer. Let us further break down how the coding vs programming debate. Let’s see how they differ with required skills, scopes, tools, and more…

There are plenty of common skills that a coder and a programmer have. Now that we know, coding is a part of programming itself. Most of the skills are common.

Here are some of the skills of a coder:

On the other hand, programmers are much-skilled professionals. They are responsible for all the aspects of building an application. A programmer’s skill often combines creativity along with technical and analytical skills.

Skills of a programmer include:

Coders should know different coding languages. They must know the proper syntax of each language. Also, a coder must know how to write codes efficiently and avoid junk codes. Removing junk codes will optimize the software and take much lesser space.

On the other hand, a programmer has more work in hand. To be a programmer good programmer, you must know how to design the structure of the software, create algorithms, manage the program, and maintain it once it is deployed.

In terms of jobs, there are so many. opportunities for both coders and programmers. Since we are living in a digital era, IT-related jobs are endless. If you have some knowledge of coding or programming, then it’ll help you get a job.

A coder can get a job as a developer in a specific coding language. In these kinds of jobs, they will be given instructions on what to code.

Junior coders can become senior coders in companies according to their expertise. Or they can try other verticals of programming as we mentioned above.

On the other hand, a programmer can play any part in the development process according to their expertise. While seeking a job, programmers have various roads open. He/she can be a testing engineer, architect, designer, etc.

Whether you are a coder or a programmer, you are always open to a huge number of opportunities.

If you are good at coding languages, then a simple text editor is enough to do the job. But many tools make the job easier for programmers.

Coders use tools like Eclipse (IDE), Bootstrap, ATOM, Delphi, PyCharm (for Python), and many more.

But programmers use tools that are for more complex operations of the development process. Some tools being frequently used by programmers are:

There are more and more tools. Every day a new technology comes and with that, ten new tools get introduced.

When a coder codes his tasks, the outcome is an error-free, compilable code. It is a small part of the whole project. On the other hand, programming gives us the whole application that’s ready to deploy.

Kids or even college students often get confused between these two terms. We hope that by now you got the key differences between coding and programming.

The Coding vs Programming debate will be there in the IT Industry. And the sooner you know the difference, the better it is for you. Both of these are required for developing a software product.

Coding is the primary step and programming includes the other steps that are required to complete the software development life cycle.

If your kid is interested to know more about coding or programming, you can book a FREE Demo with us and start your kid’s coding journey. Click here to book your Live 1:1 Demo Session.

Following are the skills one is required to possess to be a coder:

Here are the necessary skills a programmer should possess:

Because coding is a narrower discipline than programming, it is not necessary to have all the programming skills to be a coder. Knowing coding languages and concepts is good enough to become a coder.