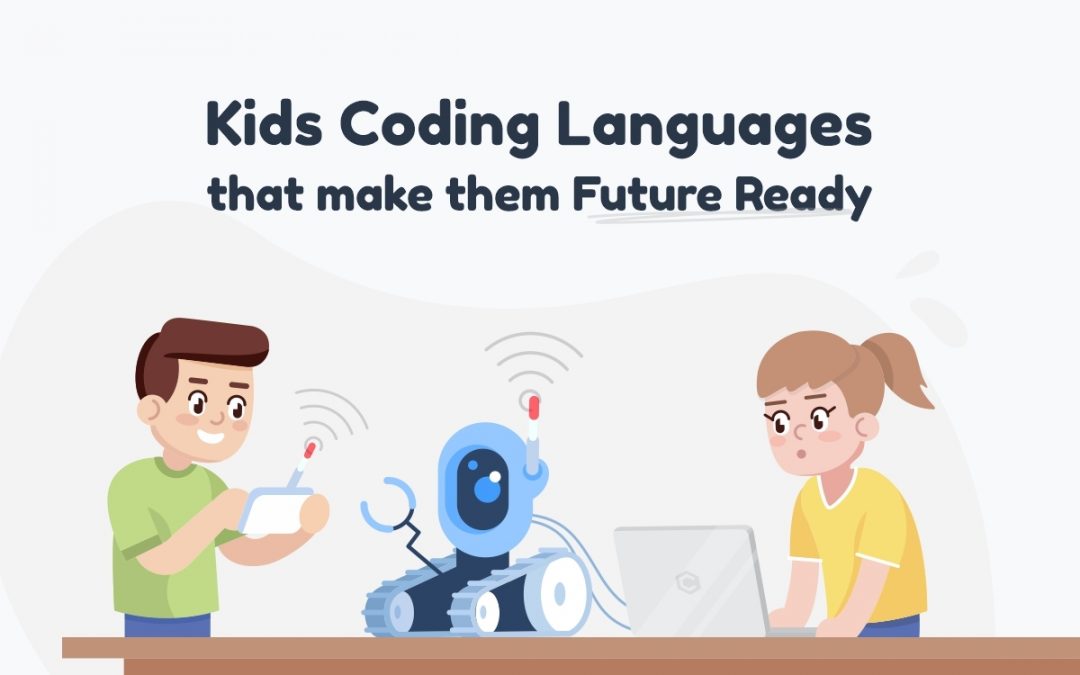 Kid’s coding is the new normal. From so many languages, there are some for kids, especially. The learning curve must be age-appropriate and step-by-step for children to have a strong foundation. Kids coding languages are circulating a lot these days over the internet.

Programming knowledge is becoming an important skill to possess within various industries throughout the business world. And the way how technology is advancing, we have a new programming language or framework every few months.

Before we go further, what is a programming language?

Programming for kids has become very common in 2021. Kids are often confused about what coding languages should they learn.

Among many languages, we have made a list of some of the best programming languages to learn.

Kids’ coding languages include a wide variety, beginning with Scratch and extending to C++. When teaching a child programming, the first step is to pick a language.

Here is an age-wise List of the Best Kids Coding Languages:

1. Top 3 programming languages for kids who are 7 years and above

2. Top 3 programming languages for kids who are 10 years and above

3. Top 3 programming languages for kids who are 14 years and above

Let’s talk about the top 3 kids’ coding languages, for children over the age of 6.

Kids love learning Scratch. It is because it is a visual programming language for children. It is a free programming language developed by MIT’s Lifelong Kindergarten Lab. Scratch includes beginners’ tutorials, curriculum instructions to assist parents, and a network of users.

It involves using a building-block visual interface that appeals to children. Each block represents a part of a code. Kids are supposed to stack the blocks accordingly to combine programming components like actions, events, and operators to generate a desirable result. Each block has a specific shape that kids have to arrange in order.

Kids have to design animations and games by using pre-made images and characters. It’s a simple drag and drop mechanism. They can upload such new icons of their own, depending on how they want their creation to be.

A good thing about Scratch is that it does not need an internet connection. Scratch is used in over 150 countries and is available in over 40 languages. This is great for teachers that are working with bilingual or ESL students.

It is a visual approach that allows children to get creative and create animations and games. For instance, kids can design 3D models, camera motions,  and scenery accordingly. A simple play button allows them to go over their creation with ease.

Most importantly, the code appears on the side of your screen as you link code blocks together, and you can switch programming languages. Doing this enables you to see the differences in language syntax. Therefore, Blockly is a perfect language to teach younger and older kids programming. Blockly is the backbone of android apps created by Android Developers. MIT has now taken control of Blockly.

The top 3 kids’ coding languages for children over the age of 10 are here!

JavaScript is a more advanced language for kids. It is an object-oriented procedural programming language. Javascript is for front-end or client-facing applications, and its actions execute on a user’s computer. Since the language is popular, it is possible to implement it on all types of internet browsers.

JavaScript is perfect for creating intricate and interactive web applications. And therefore, perfect for kids who want to pursue app and web development and designing. After learning Scratch, similar languages like Javascript should be the next kids’ coding languages to learn.

As a coding language for kids, Java is a little more advanced than JavaScript. It makes this the best programming language for high school students. Java is extremely popular and is growing in popularity every day. Most importantly, more than 90 percent of Fortune 500 companies use Java.

Thus, a student’s education and job opportunities improve once they learn Java. Developing their coding skills in college and acquiring specializations and degrees in computer science will help them reap added benefits.

Being a statically typed language, the student has to specify a variable type. Because of this nature, apps built with Java are more stable, can be expanded on, and maintained easily. It is perfect for kids on an intermediate level to design game engines, Android apps, and back-end environments.

Minecraft is one such game that kids can learn using Java. Thanks to Minecraft, it is easy and fun to teach this code language for kids. If your kid is giving the Computer Science AP exam, ensure that they do a Java course!

The abbreviation of HTML is HyperText Markup Language. A coding language developed by Tim Berners-Lee in the 1990s. Since then, it has been developing majorly. Essentially, HTML is a hidden code and builds a communication bridge on the worldwide web aka, www.

HTML works by the programmer using “tags” to the text. Subsequently, they create a web page to set it up with structures and graphics.

Pertinently, HTML includes three aspects: the main heading, paragraph, and bullet list. While no specific software is required to run it, HTML is used to design a web page using either notepad on Windows or TextEdit if you’re on a Mac.

Because of how easy it is to use, kids can pick up this code language to design websites in a jiffy.

CSS complements HTML because it is used to style components on HTML websites. Be it margins and font colors, width and height, images and videos, backgrounds, lines and positioning, layout designs, and all types of visual aspects – CSS makes it happen!

Because of this structure, children need to learn HTML and CSS jointly. CSS also empowers young minds to get creative and design a beautiful website that gathers more traffic.

As of early 2020, JavaScript and HTML/CSS were the most commonly used programming languages among software developers around the world, with nearly 68 percent of respondents stating that they used JavaScript and 63.5 percent using HTML

For the top 3 kids’ coding languages for children over the age of 14, read on.

Funny enough, Python is a programming language named after the series Monty Python. It is considered one of the easiest programming languages for children to learn, owing to its simplified syntax and focus more on white space. Python requires a fewer set of codes to operate. It is ideal for students of slightly more advanced age to learn quickly.

Used by Google, Disney, and endless companies, Python is perfect for developing complex subjects. Be it video games and movies, scientific and numeric computing projects, or web pages. Python is the way to go. Owing to nature, it is the best programming language for kids who want opportunities in similar backgrounds.

Importantly, cybersecurity and artificial intelligence are growing fields, and Python used here is the most. Therefore students who pick up on it now are sure to win great opportunities soon.

C++ is the language for kids who want a deeper understanding of programming. Students can use it easily to create applications that run locally on PCs. Even though it takes time to understand the complexity of C++, it continues to remain one of the best programming languages for children.

Your kid will learn how to create system software, games, and a wide selection of other resume highlight undertakings. It is perfect for children programming and making games.

Pronounced as “see sharp,” C# enables kids to create 3-D games. Popularly used to create third-party applications for Windows, C# is the fourth most popular programming language used in the I.T. industry and the best programming language for high school students who can learn it. Since it is similar to Java, it is easy for students to learn quickly.

Largely known as a Microsoft clone of Java, C# is used to create web applications, games, and other programs as well. Students with an interest in application designing and those who want to learn beyond Java would love learning C#.

Map out your child’s first step into coding, and figure out how they can move from them. Ensure that this is according to their interests and the future opportunities they would be good at.

Choosing our platform is a great way to start your child’s coding journey. We provide online coding classes for kids and don’t forget that our classes are fully personalized. Here’s a list of courses we cater to. Visit Codevidhya for more details