Future After Learning to Code for Kids 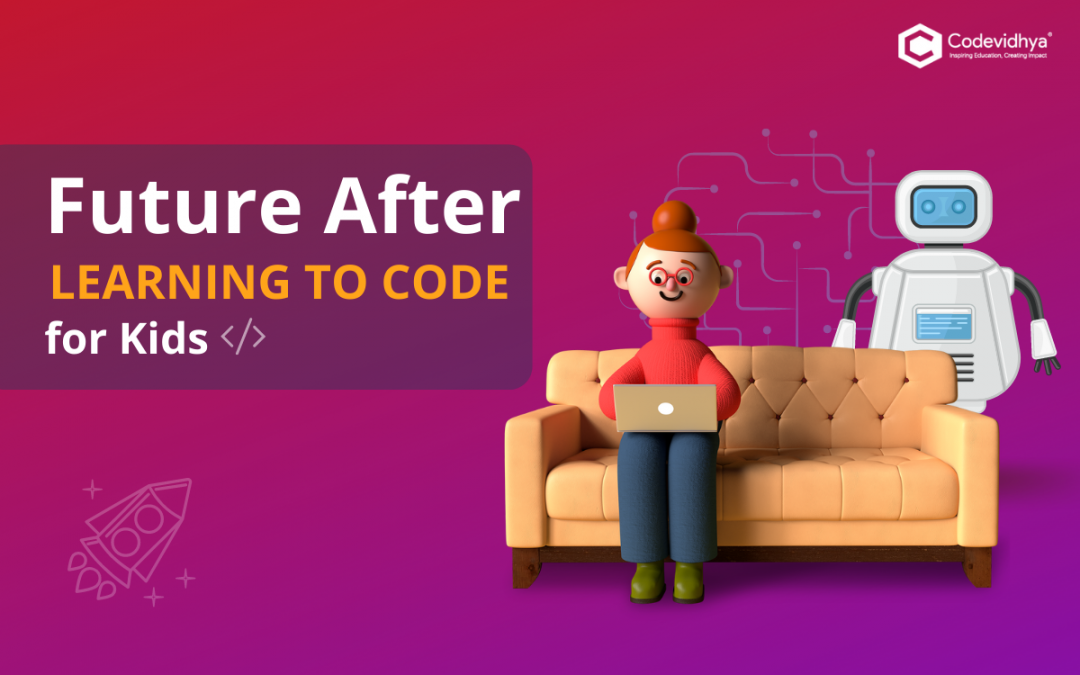 It’s never easy to ponder about your kid’s future as a parent. Every parent is concerned about good career opportunities for their children. Future after learning to code is brilliant as coding is a fantastic choice for all those parents.

Have you ever come across the term coding before? If yes, how much do you know about it as a potential career path?

In this post, you will get to know what coding is. Other than that you will read what career opportunities are available for you after your kid learns to code. So read on further to know more about it.

So you’ve probably heard about the trend for learning to code. But, exactly, what is coding?

Here’s your answer: The ability to build computer software, apps, and websites is made possible through coding. Coding is used to create:

You must be undoubtedly wondering “How would learning to code be good for my child?”. Here’s how your child can put it to use:

Learning to code allows one to perform a lot of things that he/she wouldn’t be able to do otherwise. It’s like:

Most significantly, you’ll be able to comprehend how technology is influencing your environment.

But coding is not Always related to Career:

Surely you’ve read somewhere that everyone should learn to code. We have heard that the future after learning to code is considered to make a good career option. People say things like that for a reason.

You can profit from studying coding whether:

Here are things that learning to code can help you accomplish:

It’s remarkable to consider how much the world has changed since the World Wide Web (www) was originally launched in 1991. The web has seized over our life and shows no signs of slowing down.

If your child is interested in a business career, a website is necessary. If not that, it’s possible that he/she enjoys being creative and writing. To advertise your expertise to potential employers, you’ll also need a personal blog or portfolio webpage.

Of course, unless you understand HTML and CSS, your ability to develop a website will be severely limited.

Read this blog to know how a beginner can create a website: How to Design a Website? A Beginner’s Guide in 2021

If you are looking for a new career for your kid then computer coding is among the best. Here’s Why:

FACT: The humble computer programmer is undoubtedly one of the most underappreciated occupations. It is because the demand for programmers far outnumbers the supply, you’ll have no trouble getting work.

More developers are desperately needed around the globe!!!

Since there is such a scarcity of coders around the world, the pay is also highly appealing. Employees at Google and Facebook, for example, are given a base salary of $125,000.

Let’s imagine your child has a concept for a software product or a web-based business. For example, he/she may aspire to found the next Facebook. Unfortunately, you are cash-strapped.

Why not learn to code in this situation?

It’s a route that a lot of entrepreneurs are taking. They started with almost no coding skills and went on to launch their own modest software companies.

So now it’s clear that there are many benefits of learning to code. The future after learning to code is considered good for enough reasons. It’s not just related to the Business field but much more. Let’s read more to know about the Career in Coding.

Learn more about its benefits: Benefits of Coding For Kids And Teens – Top 9!

Can You Make A Career In Coding?

Yes, coding is a fantastic career since there are a lot of possibilities. You receive a good amount of salary!!!

Coding can be a gratifying profession because of its impact on everyday life. It can also be enjoyable for those with a wide range of interests.

Here are in-depth explanations of the various reasons why coding is a desirable career choice.

How Future After Learning to Code Can Make a Great Career?

If your youngster enjoys coding, it is a good career choice. With each passing day, the possibility of someone making a living doing something they enjoy grows more real.

In the past, we didn’t have that luxury. It is because the world was considerably simpler. There were only so many different types of tasks to accomplish things. However, it has been altered since then. So, if:

You can just go for it. You could be onto something when it comes to coding being a good career. Your children can have the best future after learning to code.

Simply google around for proof. You’ll see that there are 1 million vacant IT jobs in the United States. And that since 2010, the number of tech-related occupations in the US has climbed by 200K every year. And that IT jobs are popping up in a variety of fields, from cloud computing to artificial intelligence to the next big thing.

All of this indicates that there is potential. It’s also not because we’re still in the early stages of technological development. We’ve all gone digital for a long time. And there will be many more breakthroughs and inventions in the future.

Indeed has named the top 25 jobs of the year, based on three factors:

The highest-paying career is Software architect, which pays an average of $119,715 per year. It requires a degree in computer science, software engineering, or a similar discipline.

The second-best career is full stack developer, which pays an average of $94,164 per year. It needs a varied mix of coding skills.

In other words, technology dominates the list, with many jobs requiring some level of coding expertise. Hence, you can have a lot of career options in the future after learning to code.

Future After Learning To Code?

There are many coding professions to choose from or we can say the future after learning to code has many career options. Here are a few instances to give you a sense of the variety of things in which coding is used:

Games, applications, and technology, in general, will become even more important in our lives in the future. self-driving cars, robotics, and futuristic shopping kiosks all require software, which must be written and built by programmers for human users.

Coding will be the foundation of our digital future, from phones and tablets to location-based installations, cloud services, IoT, and much more.

Children who become familiar with various coding languages surely become desired employees, regardless of the job or industry in which they want to work.

Electric automobiles are the way of the future, according to a study. And the same cars will include automated driving systems that will remove the duty and concern out of driving a car.

We’re told it would improve our lives because we’ll spend less time stalled in traffic. Because these cars will be used by humans and interact with them, who better understands their demands than a human engineer?

Those engineers will be required to design and construct cars. They’ll also be required to develop the autonomous systems and networks that will drive automobiles and deliver packages, as well as public transportation.

Artificial Intelligence and Machine Learning are two of the most rapidly evolving technologies that are affecting every industry. They’re used in everything from self-driving cars to chatbots, smartphones, and other electronic devices.

Programming languages are required: A thorough understanding of programming languages such as Python, Java, R, and C++ is required. These are basic to learn and cover a wide range of topics. Python is commonly considered as the machine learning lingua franca.

Coding skills are even required in the space industry. Coding has always been a part of space exploration, and it continues to play an increasingly important role. People can safely explore, investigate, and learn about the world and universe. All thanks to the software engineers.

As a result of these attempts, developers all over the world can map asteroids to see what items might be present in which locations for future collection, predict radiation to keep astronauts safe on the moon, and give open source projects access to petabytes of Earth science data to study our home planet.

After reading the preceding facts, you must have realized that coding has become so important to organizations in all industries that the next generation will regard it as a necessary talent to keep up with new advances. Not only can coding provide your child with a fascinating and lucrative profession, but it can also provide them with job chances.

So, if you want your child to learn to code, try Codevidhya‘s coding classes for your kid. We have a widely recognized programming course to jumpstart your kid’s coding career today.

You are just 2 - STEPS Away from making your KID a PRODIGY!

Enter the details to Book a Free Coding Class: