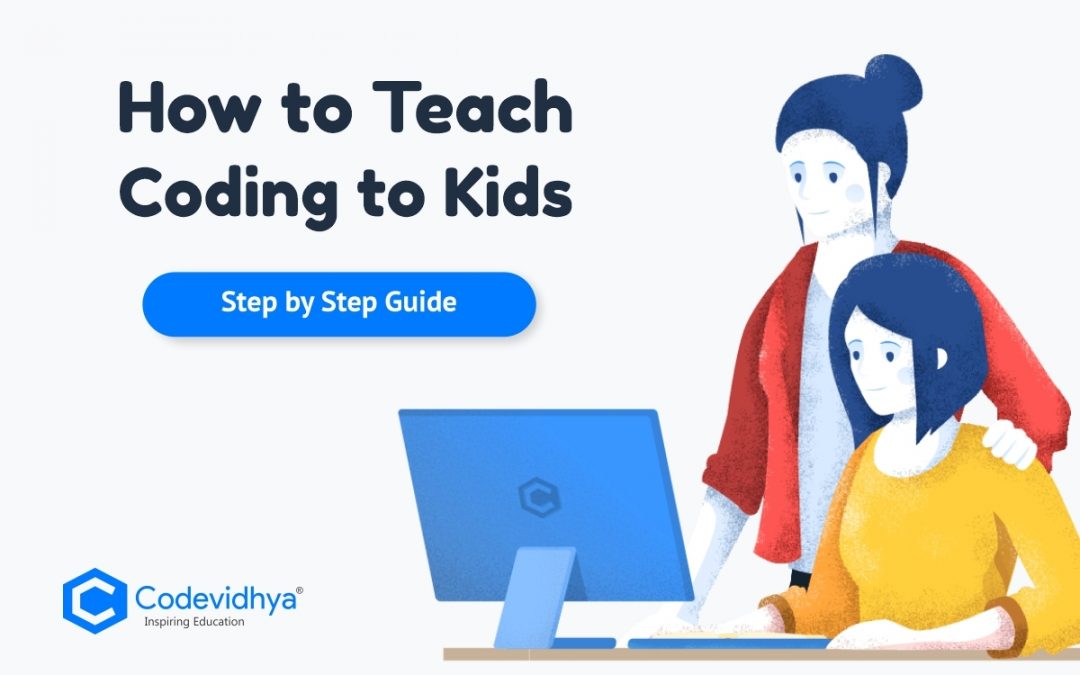 Parents must have encountered this question lately, “How to teach Coding to Kids?”.

Because coding for kids is something you have to know about.

You cannot miss this. ✅

Just when you start getting accustomed to the existing technology, something new drops in the market.

Today’s kids have a better knack for technology than the elders. 🤖

All these things indicate one thing.

It’s time to get these kids acquainted with the whole making of all things technology.

The one most important word is ‘Coding’.

Not just coding, coding for kids.

As difficult as it may seem, teaching kids coding is easy.

The secret about teaching coding to kids is to teach programming as a creative activity for any kid to engage.

When has any child learned anything the basic way!

Teaching coding to children will give them a skill for life.

Many different programming language tools exist for teaching children how to code.

Some of these tools are developed as open-source and free ones that reached millions of children around the world.

You can teach kids how to program with ease by the end of this step-by-step guide.

Let’s discuss 7 easy steps to learn how to teach coding to kids.

It goes without saying that over the next 10 years, programming will be one of the fastest-growing occupations.

When we learn something (new), we learn it thoroughly and step by step.

Thereafter, it is ideal to teach and learn coding step by step.

Let us talk about the first step.

↪️ The first step is to define it for kids.

It will act as their guiding principle or rule of thumb to keep in mind when they’re confused.

Go with the basics of coding.

Use analogies, use examples – explain the concept in simple language that kids can relate to and understand.

For example, to answer the question “What is coding and how do you do it?”, explain it this way:

Therefore, the code written by you leads to a specific outcome that your computer or gadget generates.

The buttons you press on your gadget lead to a code being fed into it, performing a task in a game, or moving to a new video.

The choices are endless!

Once you break it down into such simple and sequential sentences, it becomes easy for kids to understand.

Let us now jump on to the next aspect of coding basics;

↪️i.e., the very first of programming for kids.

To do this, answer the next natural question that pops up in the minds of kids,

“If coding is instructing a computer, what language do we use to communicate with them?” 🤔

Explain that languages take many forms and functions.

What this implies is that just like the human world, in like manner computers too have different languages to communicate. 🗣

The way we speak to different people in different languages, we communicate with gadgets in the language they interpret.

Introduce the different languages to the students – from the child-friendly Scratch to Javascript, Java, Python, and C++.

Remember to mention that each language is used for a specific goal to achieve in mind, with a specific gadget or software.

You must remember that when teaching coding basics to kids, Scratch should be the first step of their journey.

Before you teach Python to kids, or more complex languages, teach them the simple ones.

Therefore children of age 7 to 15 years must learn Scratch.

As established, Scratch is the best way for kids to learn coding.

It helps in inculcating strong coding basics for kids.

Research and studies show positive effects of visual programming environments on students’ learning. It was found that a slight improvement in the students’ self-confidence in their problem-solving ability has been enhanced while working with Scratch.

(Also Read: Benefits of Coding For Kids And Teens – Top 9!)

This block-based coding language offers a visual learning experience for the children as it enables them to drag and drop blocks of code to create different characters and games.

Scratch is a great coding platform for beginners.

This is the next best coding language for beginners.

It plays a crucial role while teaching kids to code.

Children can use JavaScript to create fun games, websites, and other client-facing applications.

Java is the most popular and widely-used language.

The popular and loving game, Minecraft, was coded in Java.

Lua is another such language used in Roblox – another great game that kids love!

But if you crack this language, you can slither through smoothly!

Teach Python to kids next since it is very complex.

Once they have a strong foundation in language, it will be easier to learn and write Python better.

3. How to teach kids Computer Programming – By building their interest and excitement!

Shortly, more than 1.4 million jobs will be based on programming. 🤯

But with only 4,00,000 graduates in computer science, it will leave around 1 million seats vacant due to scarcity of programmers.

Also, read about “Why Digital Literacy is Important for Kids?” here

Grasping the attention of young minds is key to teaching them new concepts (and to be honest, their attention span is that of a goldfish😛).

As explained above, if we talk about the different languages they know and video games that involve coding.

It will have them hooked and intrigued. You will connect with them as an educator.

It enables you to successfully and efficiently teach kids programming.

If they are not interested in coding, tell them how data science and artificial intelligence are related to sports or how pressing a button on their gadgets implements a code and brings about the action they want.

Coding could be as simple as pressing the on and off on their phone. 📱

4. The right coding platforms for beginners

It is designed especially for kids and runs in all modern Web browsers.

Pick similar courses and tutorials that have visual styles and captivate a child’s attention.

Most computer courses and programming tools are curated to teach kids how to program using Scratch.

Since Scratch has blocks of code that won’t fit together if they do not get along computationally, making syntax errors is impossible.

It makes Scratch the perfect tool for younger kids who can’t type well.

Once young kids learn Scratch, they would want to upgrade to a new and advanced language.

They eventually outgrow the basics. Coding for teens and pre-teens involves teaching them programming languages like Python.

It makes for the perfect first programming since it involves simple syntax.

Want to know more about a career in coding? Read this blog!

5. Writing codes is the way to go when teaching kids how to program

As an educator, there is only so much you can explain and talk about to teach kids programming.

Python is great for kids who want to practice since it is interactive.

Subsequently, it encourages experimentation with the instructions.

They can move to web and app development with time.

The key is streamlining their practice sessions in a step-by-step process and assisting them when they hit roadblocks. 🔐

STEM has become an integral part of the education system throughout the world.

But many people are still unaware of its core objectives.

It could help us win against the challenges that the future has in front of us.

6. Teach kids programming on a computer of their own

Are you teaching a group of kids?

Is it a personal tutoring session?

Either way, push for each student to access a computer or laptop of their own.

A simple bare-bone PC is a good starter kit for young students. Accessories would, of course, include a mouse, keyboard, and monitor.

Try to keep Chromebooks, iPads, and tablets at bay since Python tends to get complicated to run on these gadgets.

7. Coding for Newbies is different from Computer Science

If you have an academic background in computer science or software development, you tend to think on a higher scale and have better concepts at the helm of your thoughts.

As educators, we love to share our knowledge with young minds and explain endless ideas to you.

If we talk about programming jobs in the future, out of the top 10 jobs, 4 will require programming experience. 😮

While it’s a lot of fun and helpful on a different level, kids begin coding in the shallow end of the pool.

Here are some topics you can explain at a later stage to a #YoungKeenCoder:

Now to come to your rescue, we at Codevidhya teach coding for kids online. Should you be interested in coding, or need more convincing on its importance, visit our website codevidhya.com. You can also take a free coding class for your child!