Important Parts of A Computer – Top 5 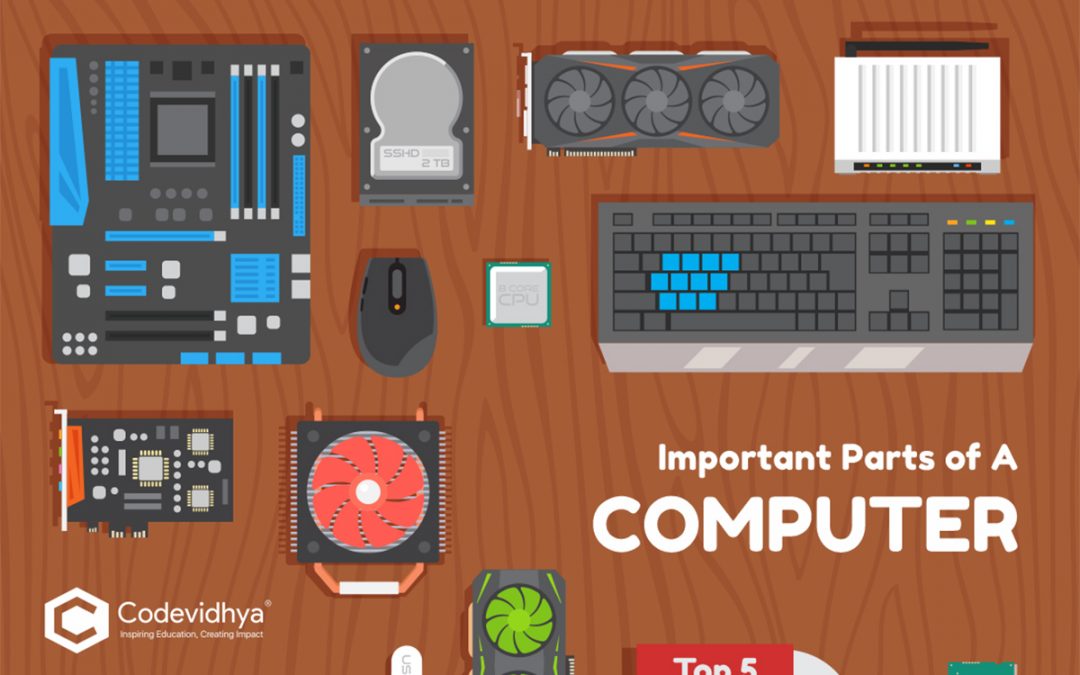 Let’s break down what a computer is before we discuss the important parts of a computer. Starting from the basics creates a great foundation for future learning, for adults and kids.

What is a computer?

Any machine which is programmed to conduct a set of codes, algorithms, and other instructions that are arithmetic in nature is a computer.

This is the basic concept. We use these machines to create art, documents, send information, and search the World Wide Web. The codes, algorithms, and other such information filled into it enable computers to conduct such functions.

The 5 Most Important Parts of A Computer

Here is a list of the 5 most important parts of a computer.

Attached to the motherboard, are the other abovementioned components of a computer. Put into an enclosure after this to be protected and used with ease, a computer can’t do without them!

(Also, read Benefits of Coding For Kids And Teens – Top 9!)

Let’s break it down together! The information, not your computer.

This part is integral since different components of a computer communicate through this circuit board. It tops the list of the most important parts of a computer. Input and output devices like the keyboard, mouse, and speakers are plugged into this part for them to function effectively.

The CPU is the brain of a computer because it is directly plugged into the motherboard. It is key to ensure communication with all of the other parts of the computer. This is why when you write a code, which is basically an instruction, it is broken down into assembly language. This makes the code understandable to the processor. It gathers, decodes, and conducts the instructions fed into it.

To generate quality imagery that is key to people who use computers to make movies, video games, and the like – the GPU is essential! To create other artwork and so on, computers use expensive software as well.

Graphics cards usually directly communicate with the display monitor. This is why a high-quality monitor is required with a high-quality GPU to create the necessary imagery.

We’ve all heard about RAM. This volatile memory unit acts as a storage space for data that is frequently accessed by programs and processes. It is erased every time the computer restarts. Because of this function, the RAM enables programs and applications to open and close promptly.

Storage in computers consists of either a Hard Disk Drive (HDD) or Solid State Drive (SSD).

HDDs are disks on which data is stored. A mechanical arm reads the disc to gather the data. Used widely, SSDs are similar to SIM cards. Since no time is wasted in waiting for a mechanical arm to gather data on the disc, SSDs are faster than hard drives.

Take note of these 5 important parts of a computer because they create the foundation of information you need to know! Gather your courage, and your data, because you have an adventure up ahead if you choose to venture into the world of Computers!